August 13, 2016
Guys, you know how I am. I tell it like I see it. And these days, I see a LOT of two things: asshole adults and asshole kids who will grow up to be asshole adults.

Not raising an asshole requires work, so if you aren't interested in some blood, sweat and tears, then close your browser, and don't forget to write a rude comment on your way out.

Let me preface this by saying: these suggestions are being made from my professional side, not my parenting side--- let's be real, the verdict is still out on whether my kids will grow up to be assholes or not (just kidding... over my dead body will they be entitled, dependent adults)... but still, the important distinction of point-of-view needs to be mentioned. 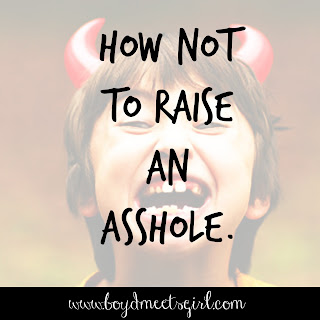 Here are some ways not to raise an asshole:

1) Teach them how to do stuff. You know how kids don't come with an instruction manual? Well, neither does growing up. Kids learn from example how to do almost everything - show them how to do things! Don't just do everything for them because they don't know how to do it yet. And start early on this. Things like picking up toys and putting them where they belong, putting dirty clothes in the laundry, putting plates in the sink, cleaning up messes on the floor, putting things in the trash can be done by 1 yr olds. You can't expect them to do things for themselves if you don't teach them how to do it, and have them "practice" daily.

2) Turn off the DAMN TV. I'm not saying never turn the TV on, but for Heaven's sake, don't leave the Disney channel on all day. Your kid will not want to do anything but melt in front of the television screen. Not only is this straight up bad for development, it completely hinders a child's imagination and creativity. Too much technology promotes laziness, hurts social development, and sets the tone of constant entertainment. Turn off the TV, and pull out puzzles and books... or go outside and play.

3) Do not ever let them forget who is in charge. This sounds so imperious, but for real, kids need to know their place in the pecking order. This goes farther than kids respecting their parents; kids need to be taught from the beginning to respect other people of authority like police officers, teachers, etc. Some parents, in an effort to be loving and kind to their children, mistake their role of "parent" with being a "friend."

4) Raise your expectations of what they can do. In large part, we as parents (all of us, including me) are still stuck in the last development phase our kid was in. Before you know it, you are doing things for your teenager that they should most definitely be able to do for themselves. If you think that your child is "too young to do that," or developmentally can't do that, you fake it 'til you make it.. i.e. "help" them do it... or at least start introducing the skill.

5) Pay attention to them. The days where I am the busiest with other things are usually the days where my kids act the worst. In their natural state, kids are assholes. So if you aren't paying attention to them, they will likely revert to their most natural state. Also, if you aren't paying attention, you are likely missing out on some valuable teaching opportunities...

6) Practice what you preach. This one is a hard one for parents to swallow sometimes because it's hard! But we must remember that in large part, our kids' behavior is a reflection of the behavior they see around them - and that includes you. So, say your pleases and thank yous, and don't think that just because you are in a higher place of authority than your children that you cannot show them what respect looks and feels like. Respecting your child looks a little different though - it may mean that you acknowledge their feelings on something upsetting, or show them a little grace when they've made a mistake.

7) Help develop their interests and skills. Arm your child with activities and resources that encourage imagination and creativity! Take them places, read them books (LOTS of them), encourage them to go outside and play. Give them arts and crafts to do. Show them how to take pride in their work!

8) Communicate your expectations of them. You need to set the rules and communicate them to everyone. An example of an easy to understand rule is no snacks after 9 pm or only one hour of technology a day. The expectation is clear. Create rules that are clear and easy to enforce. Stay away from "never" or "always" because there are always exceptions. If you have a busy schedule or feel like, as a family, it's hard to create rules you can stick to, make general rules. But HAVE RULES.

9) Reward good behavior, but not expected behavior. Exceptionally good behavior can be rewarded, after all, that is how adults are treated in the real world job setting. But expected behavior should, at most, earn acknowledgement in the form of a "thank you for cleaning up all those toys" or "good job on your homework tonight." You don't see people giving lollipops to 8 year olds for going on the big boy potty, do you? Don't shell out prizes for things that your children should be doing anyway.

11) Keep special things special. You don't get a cookie after every meal. You don't get to pick out something at the store just because. Everyday isn't going to be filled with fun activities from sun up to sun down. One of the problems I see time and time again is that through our own behavior as parents we are setting our kids up to expect too much. And before you know it, you have created an unrealistic expectation of how things are. You can even have them "work" for things that are special... like when your class got the most stars, at the end of the year you got a pizza party.

Sure, there are tons of other ways not to raise an asshole. And you may do all of these things, and still have an asshole kid. Or you may not do any of things, and in fact, do the opposite, and your kid isn't an asshole. This is just my opinion - you can take it or leave it! But really, I am fearful of the effects of raising entitled, clueless children will have on our future. Can you imagine what the world will look like in 30 years? So, if you aren't already, start thinking of your sweet child as a little human who will, someday, be a member of society. I'm not saying rush kids through their childhood, but goodness gracious, equip your kids with foundational skills so at least they have a fighting chance in the scary world of our future.

March 31, 2014
Now, don't get the wrong idea here... I'm not sending a passive aggressive message out there to men (do men even read blogs?) that women hate doing house duties. We love it - right, ladies??? (wink, wink) And I'm not complaining either. (Although I do despise laundry, I love a clean house; so it's a double-edged sword.) One thing I'm BIG on is positive thinking . Sometimes, it is hard to be positive if you are feeling overwhelmed with dishes, laundry, cleaning, cooking... oh yeah... LIVING IN and maintaining a home. So, I thought sharing my thoughts on this topic could maybe help some disgruntled wifeys out there. 1) Don't hate, delegate - I'm a huge fan of starting young with manageable tasks around the home. There are a bunch of lists floating around the interwebs of chore lists for kiddos, and a lot of them are pretty dang silly (one suggests letting a 2-3 year old put dishes away, um no!)  -- but my favorite one is from Kids Activities Blog.  2) B
109 comments
Read more

February 07, 2018
As a busy, working and social mom of two young hellions, I am constantly teetering on the balance of completely and utterly (and not fabulously, might I add) losing my sh-word. Man, what a starter. What an intro! Hello, welcome to my blog. My name is Tara, and I’m completely crazy. I use the term “hot mess” way more than socially acceptable; in fact, there are times that I use the phrase, in reference to myself, and I can literally HEAR someone’s thoughts of annoyance in me. But, I digress. But, it’s true! I’m about one bad day away from flipping out hardcore. Part of it is my innate nature to be involved in *everything.* Combine that with my inherent disability to saying “no,” and it’s a recipe for… you guessed it… “hot-mess-ness.” Totally a word I made up and use… a lot. As I look at my planner (that I am obsessed with - who else have to have their lives written down somewhere or else they have NO IDEA what they are supposed to do that day?!), I realize…. “Dang, I am
12 comments
Read more